Letters and My Stories

I was the technical director of Suedflug, a German passenger carrier, operating a fleet of 16 aircraft. I retired in 1968, because Lufthansa bought out the company and closed it down. 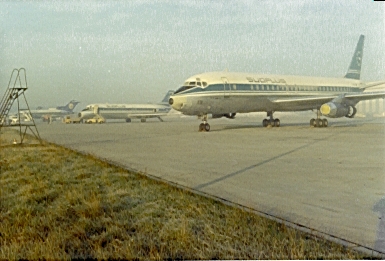 Lufthansa offered me a job, but I refused it for various reasons, mostly money. We agreed to separate for six months salary, three months overtime and three months holidays plus a first class ticket for the wife and myself: Stuttgart - Mombassa - Stuttgart.

I was happy with the deal, but going on 44 years and wondering where the next job would take me. Airline executive positions were never plentiful and always meant moving location and sometimes the country, like a bounty hunter: have gun - will travel.

It was sorted out fast the very next day. A businessman - Henry Kowalski - phoned me for a meeting to discuss a crazy idea. We had a meal, agreed on my salary and I took on the job in Biafra as general manager of the German protestant church "Diakonisches Werk" - to operate five Douglas DC-7C type aircraft, donated by Lufthansa. Not bad for a good Irish catholic.

Those aircraft built by McDonnell Douglas in Long Beach, California, were known as the Queen of Skies and carried 140 passengers. They were foreseen to last 25 years in service, only to be replaced by jets DC-8 and Boeing 707 four years later, which could fly twice as fast and take double the amount of passengers. At least those five proud aircraft were being eliminated for a honourable cause, saving thousands of lives from starving in Biafra.

The Biafra war cost a million lives in soldiers and people dying of hunger. Biafra - a region the size of Ireland and population of about 7 million. The reason the war started: the Ibos were a highly intelligent race and held a lot of positions all over Nigeria. The army murdered about 30000 Ibos. Colonel Ojukwo started a rebellion and tried to break away from Nigeria.

The next day, after signing the contract with Henry Kowalski, I went to Amsterdam and met Burt P., a famous aviator. He handed me a bag full of money: dollars, francs, marks and escudos. Joe Tollar, my assistant and myself spent six hours counting it. This money came directly from collections at mass.

That night we took off on a Boeing 707 with 30 tons of food and 15 guys, a mixed lot: two Irish priests, two German doctors and about six reporters. We landed in Sâo Tomé, a Portuguese island. After getting off the aircraft father Byrne walked up to me and said "Hello Pat", shook my hand, he carried my bag full of money through the customs, even though I never seen him before, Henry had it organized.

Five McDonnel Douglas DC-7  aircraft, which we operated in Suedflug, became the property of Lufthansa with the takeover. They donated them to the German protestant church, who in turn gave them to Henry. He started carrying food from Portugal, but he was accused by the Biafrans of being an informer. That is why the church instructed him to get me. Maybe Lufthansa had a hand in the deal.

Two days after landing on Sâo Tomé we flew our first mission. A very successful operation began doing eight to twelve flights a night. The aircraft carried 16 tons of whatever the joint church supplied - mostly fish, salt and flour. By ship the supplies were taken to Sâo Tomé from all over, but especially the British isle and Europe, later also from the USA.

Several charter companies operated from different points in Africa into Uli airport. Most of the Cargo was lifted from Sâo Tomé and Cotonou / Libreville. The aircraft could only be operated at night, as Nigeria had employed Migs (Russian fighter aircraft) during the day to bomb the runway. In fact it was a road that had been widened. To hide the runway banana trees were planted in barrels and put on wheels, which would be wheeled out to the side after darkness to let the aircraft land.

Landing lights had a canape over them and a cut on the side. The pilots had to be exactly in line with the runway otherwise they would not see the lights, which would only be switched on upon command of the aircrafts crew. The ground stations VHF radio was also on a wheelbarrow, so that it could not be pinpointed by the night bomber.

Time expired, the aircraft would have said, would they have been able to talk. The yearly inspections were not performed. When the engines had flown 2000 hours they should be changed, but they were flown until they failed. Only standard maintenance was performed like plug changes, magneto timing, desludging of propellers. All defects we rectified and to be honest about it, the aircraft were safe to fly.

We employed 16 locals, built a wooden shack on the airport to store tools, spares and put in a stove to cook. The chief of our local staff one day invited me home. I accepted, thinking it would be a new experience. It was - I had visions, he would be living in the town, about five miles away. At 5 o'clock that evening he said: Let's go; and started to walk across the airport. He lived in a wooden hut - 1 room, a wife and 4 kids. Food: rice and snake, it tasted good.

In Africa it is standard practice to loan the wife, when your own wife is not available. That worried me while I was eating. Fortunately I was spared this experience, but walking back didn't help my nerves: between snakes and crabs moving out of my path.

Christmas 1968 I got Roswitha and Kevin (6 months old) on a DC-6 aircraft from Copenhagen to Sâo Tomé - 24 hours flying time - to visit me. A visa was granted, but not stamped in the passport. The chief of police and the governor of the island were fighting for power. So Roswitha and Kevin were deported, even so I got a doctors certificate for Roswitha.

It was always a three-man crew: captain, co-pilot and engineer. They signed a contract, in which it was stipulated: there was no insurance. It was their own responsibility.
Each flight (Sâo Tomé - Uli airport and return - three hours) was paid cash: US$ 500 for the captain, US$ 300 each for the co-pilot and the engineer.
It was not unusual for a crew to have 60 flights in a month.

The maintenance staff, operations and administration got a good monthly salary plus living allowance plus a bonus for each flight.

The Doom of the five aircraft:

1.      One aircraft never left Faro/Portugal due to money dispute.

2.      The second landed in Biafra and damaged the gear. We worked all night, taking off some spare parts from one of the other aircrafts, in the meantime the damaged one was covered with palm- and banana branches, in the hope, that the Mig-pilot would not see it.

3.      The third aircraft was being offloaded, when a bomb fell alongside. The captain got a shrapnel in the back of the leg. He tied his necktie around his leg to stop the bleeding. The co-pilot got a piece in the back of the neck. He was laid out in the cabin and was attended by the priest. The flight engineer and the captain got the aircraft of the ground, two engines failed within minutes, but they landed safely on Sâo Tomé, coming in on a wing and a prayer, the boys earned their money that night. We had 300 holes on the side of the aircraft, the mechanics inspected the damage, repaired whatever was necessary and rounded out the holes. I bought two time expired engines from friends in Copenhagen. Due to the whistling through the holes, we renamed the aircraft to the "Whistler" and put it back in service.

4.      The fourth aircraft has the following report:

Aircraft departed Sâo Tomé at 21:50 hrs local time for it's second trip of that day and crashed approximately 2 hours and 5 minutes later. The aircraft was reported to be missing by Sâo Tomé authorities at 05:00 hrs Sâo Tomé time on December 8th, 1968 and the crash was confirmed by Biafran authorities at 08:45 hrs the same day.

Later a cable was received from Biafra to the effect that all people on board had been fatally injured. On board were:

The aircraft was fuelled before departure to 20.000 LBS with 115/145 fuels. It was located four and a three quarters miles from the south end of the runway and three quarters of a mile to the right side of the centreline. After making contact with a tree approximately 100 feet high as it was doing a right turn on base leg, it was scattered over an area 850 meters long and 80 meters wide. There was very little of the wreckage left to investigate as it all burned out.

Observations made at scene of accident:

Other relevant observation:
The meteorological office of Biafra reported seeing a flash and hearing an explosion at approximately 00:52 hrs Biafra time.
There was a cloud formation at base leg - base of clouds being somewhat less than 500 feet.
It is being assumed that the captain was attempting a VFR approach and came in contact with subject tree at base leg.
Co-pilot reported downwind at 05:00 hrs. At 00:52 hrs he requested that the runway lights be turned up. No malfunctions were reported. That was the last contact with the aircraft.
It should be remarked, that a Constellation crashed near the same are about eight months ago.
During the entire investigation no proof was found nor were there any indications that there had been any military action directed against the aircraft.

Persons present at the above investigation:

The original of this report has been sent to the Bermuda Board of Civil Aviation with all necessary documents attached.

free Joomla templates
Back to top