Letters and My Stories 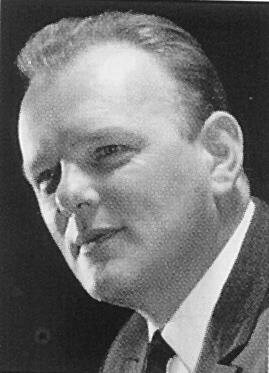 in 1952 Stuttgart/Germany registered the 1st Airline after World War II. 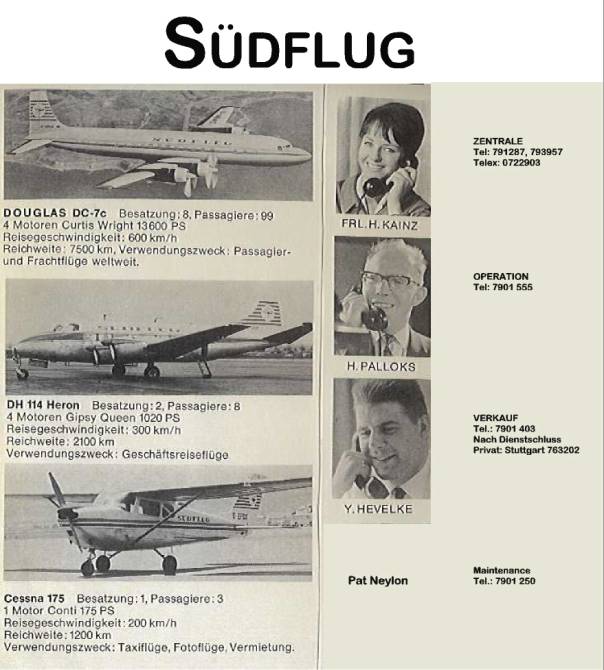 And I was 1963 maintaining two DC-4’s for William C. Wald Associates/New York in Luxembourg.

Continentale Deutsche Luftreederei, a German Charter Co. operated four DC4’s (Douglas Skymaster) out of Hamburg. They went bankrupt in November 1962. One Aircraft was in the hangar getting a “B” Inspection. In actual fact it was in bits and pieces when the American owner showed up.

I was then the Hangar Foreman, holding an American license, the yank quickly came to the point how much money I earned, how many mechanics and how long it would take to fix and assemble the Aircraft.

As Christmas was on the doorstep, no salary, no Xmas-bonus, we agreed 2 Dollars cash per hour for ten mechanics and ten eight-hour working days. After a short discussion he decided, he couldn’t live without me.

On the 17th of December 1962 I organized two crews to ferry the Aircraft to Luxembourg. I loaded the records and historical documents into my car and drove to Luxembourg.

We set up an office in the Luxair new building, next to their new President: 24-year-old Roger Sietzen.

Joe Barta and William Wald, the owner of the two DC-4’s, showed up. I was faced with a complete new experience. I had to produce a sales-brochure, which is no easy task. About 25 pages, list engines, hours and cycles, list all avionics, all rotable components, inspection-systems, fuel-capability, weights, range. I employed a secretary. After 14 days the brochure was ready. They next step: to find a customer.

We sent a brochure to Suedflug. Rul Bueckle, Hans Suter and Mario Brando flew into Luxembourg with their own Aircraft: a “Heron”. 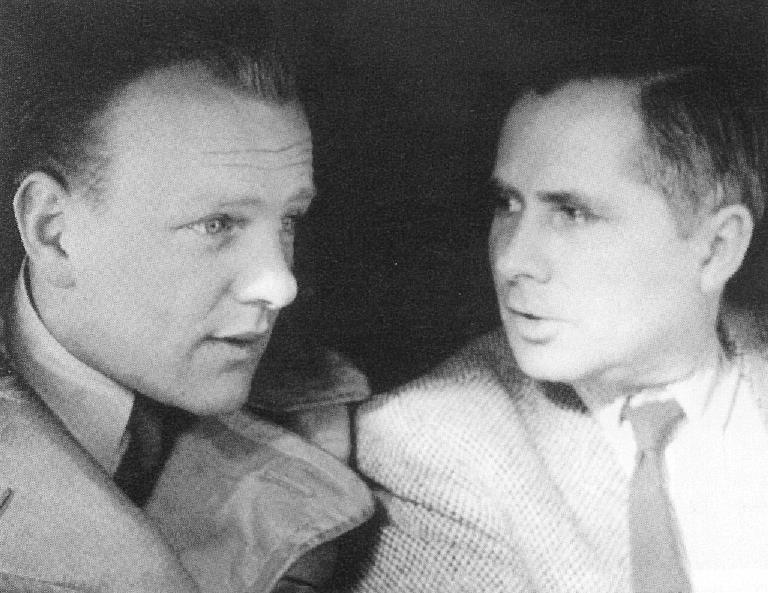 Rul, himself a pilot, was the founder with a capital of DM 20,000. A very adventuress type accepting any contract to fly anywhere anytime. He wrote several books.

I was doing my sales-pitch that the DC-4 was the best Aircraft in the world, the safest, and simple to maintain etc. etc. Rul only spoke in German, so Hans Suter translated. I had spent 10 years in Germany, so I understood everything. Rul spoke perfect English, but didn’t let on. It is a good tactic, gives you time to formulate the answer.

During our two days of discussions we crossed swords a few times. The business never materialized. One DC-4 I sold to Ian McLean. He started an airline: Malta Metropolitan. The 2nd Aircraft was sold to John Block: Transavia Holland. Capt. Wheatly, an American, and myself delivered the Aircraft to Amsterdam.

While waiting to complete the paperwork, I was handed a Telex to phone Rul Bueckle. Two minutes later he offered me a job as Chief of Maintenance – speaking in German – I replied in English. I mentioned our differences in Luxembourg. His reply: if I had been working for Suedflug, he didn’t see a problem.

William C. Wald offered me a job in Beirut, but with a couple of kids going to Kindergarten it appeared wiser to give Suedflug, based in Stuttgart, a try.

I parted with William C. Wald, closed up the office and headed to Stuttgart.

Rul had a nice little Operation: 5 Herons and sub-leasing them to KLM and Pan American. Due to extension of the Run-away, also a Queen Air leased to Siemens.

KLM had put their fleet of Douglas DC7’s on the market, replacing them with Jets: DC8’s. Rul signed up for two DC-7’s, 104 Seats to carry Holidaymakers down south to Spain and several other holiday-resorts.

I employed a dozen ex-Continental-mechanics. Roswitha closed up home in Hamburg. I rented a three-room apartment in Bernhausen/Stuttgart. Roswitha arrived with a rented truck with furniture and Michael and Sheila.

Suedflug rating was limited to Regional with 19 passengers. Now we applied for large Aircraft worldwide. A Technical-Procedure-Manual had to be written; stating every phase of inspections, controlling components, training technicians and have qualified inspectors. All of this had to be certified by the Air Authorities (L.B.A.). KLM, known as the Jew-man of Europe, tied in Rul with a maintenance-contract. Every hour the Aircraft flew for Suedflug, a premium per hour was paid to KLM, which more or less was a handshake. Instead of a 30 page contract a lot of lawyer-terminology, that’s when the problem started. My standpoint everything was included. They invoiced a 100 different things: modifications, units B.E.R., loss of items, anything remotely related to an incident.

It was quickly established: I was the bad guy! I thought of myself as David against Goliath. To make matters worse: my assistant was Dutch, all Captains, Co-Pilots and Flight Engineers were Dutch.

In a short space of time we had six DC-7 Aircraft from KLM. The Dutch were primadonnas; my German mechanic and myself were treated like second-class citizens. Eventually it came ahead over a propeller-defect with me telling the Chief Flight Engineer Joop, that he didn’t know the hell what he was talking about!

Rul was in hospital and was lucky to survive a simple throat-operation due to malpractice. The Chief Captain Jan Elbessy was making plans to take over as General Manager and promote my Dutch Assistant to my position.

I was under the impression that Rul was in agreement. Luckily Rul survived. After a week he was back in the chair. I went to see him to throw in the towel. After ten minutes Rul explained we were in the same boat and I was leaving a sinking ship and he would have to follow.

Knowing this I happily called Jan, my Assistant, into my office and issued a number of instructions. Finishing with the remarks, if he had any reservations, he could see Rul Bueckle. I was pleased to notice his jaw twitch.

A DC-7 was on route into Nuernberg and lost the hydraulic fluid. To rectify the Aircraft was flown – gear down – to Schiphol.  The hydraulic pump broke down, contaminating the complete hydraulic system. All the hydraulic components had to be replaced. KLM billed us for US$ 75,000.

A review of the records proved the pump was time-expired, so we refused to pay.

I didn’t agree, but he convinced me that sometimes it is better to solve the problem.

We quickly expanded the fleet:

We were very successful, growing rapidly and making large profits. That’s when Lufthansa decided to do something. At that time Hertzog, a Travel Agent, owned Suedflug 50 % by Rul Bueckle and 50 %. Lufthansa bought the Travel Agency. It was clear Rul would not continue sharing the airline.

It took him a couple of days to figure out how he could squeeze DM 10,000,000- out of Lufthansa for his 50 %. (How he managed cannot be mentioned now) In seven days Rul picked up his hat and coat and left a beautiful building, which was only completed for Suedflug six month before.

Lufthansa sent in a team, lead by Dr. Koch, to close down Suedflug. Extreme pressure was exerted on all executives and very quickly it was a free for all. Each making the best deal they could. Most pilots and flight engineers joined Japan Airlines. My staff got scattered. 12 of them had been with me in Hamburg they got jobs in the Congo and when I joined Suedflug they came on board.

By now the two DC-9’s were sold and delivered to Swissair.

The two DC8’s were sold to an American company: Fred B. Ayer, who in turn sold them to Atlantic which was founded by Tillman Ullrich and Werner Will, ex Suedflug-staff, and it turned out they employed most of the Suedflug-people. Not alone that, but they also bought three brand new DC8-63’s from Douglas. In actual fact Lufthansa later admitted they made a mistake buying Suedflug. The devil you know is better then the one you don’t!

Again the staff quickly scattered. Being highly skilled they quickly got jobs and in some cases improved their position. We still bump into them as Managers, Directors.

Something very positive with such a large fleet of different type aircraft and high utilization: we were never involved in an accident or even incident, not to mention loss of life!

Our relationship with the L.B.A. (Luftfahrtbundesamt) German Air Authorities for that reason was excellent. We had some spies, which were feeding them stories. The old game trying to cut some legs from the chair – you would call it now: mobbing.

We had quite a number of foreigners, especially the flight crews, but ground personal was mostly German, as well as female cabin-staff, usually very pretty. Rul insisted on vetting them all.

Suedflug-parties: I could only describe: Wild and spectacular: a Gill-party with a wild pig, bone-fire and music on the edge of a wood. I won’t go into any details. It appeared all had a good time!

Roswitha and myself spent a lot of holidays with the kids in and around the Black Forest. We also traveled free of charge on Suedflug when there was space available on the aircraft.

Once we flew to the Canary Island Tenerife with Michael, Sheila and friends of ours Helga and Detlef (he worked for the customs at Stuttgart-airport.

Rul was so kind to let us all stay in his bungalow in the Orotawa valley. Michael and Sheila got quite ill. So Roswitha would stay with them one day and I stayed with them the next day.

The fun Detlef and myself had in the mornings was catching flies and feeding the spiders in the big banana-plants.

When we were due to fly back to Stuttgart we packed our bags, drove to the airport, only to find out that the Aircraft was completely full. So we drove back to the bungalow. This happened three times and the third time we had the Aircraft all to ourselves flying to Palma de Mallorca. There we were faced with nearly the same problem, as the Aircraft was quite full. But we managed to get on board. By take-off and landing I sat on the toilet, while Detlef sat in the cockpit. Roswitha was asked to change her seat with a heavy man, because his seat would not decline. Anyhow he said Spanish people should not be on board, as this was a German Charter. Roswitha had a good tan and he thought she was a local.

I often wondered over the way Lufthansa closed down Suedflug.  Lufthansa had complete disregard for the employers.  As far as I am concerned they achieved nothing on the contrary a half dozen companies sprung up, mostly started by the people Lufthansa got rid off at Suedflug.

Today Suedflug would be bigger than Ryanair and German Wings together!

But look at all adventurers, challengers and excitement
(and more to come) I would have missed!?!

free Joomla templates
Back to top